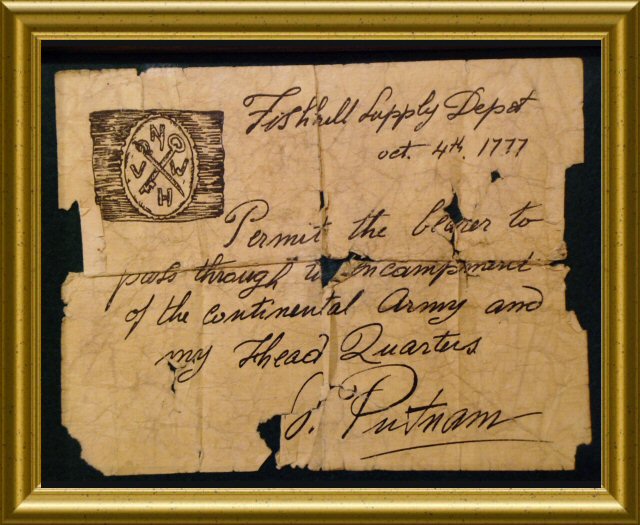 This replica pass is used today to welcome visitors at the Van Wyck homestead, headquarters of the FSD during the Revolutionary War. (click for larger image)

Our American Revolutionary War is remembered by its heroes and participants: George Washington, Betsy Ross, Benjamin Franklin, Von Steuben, Lafayette, Thomas Jefferson, William Knox. We also remember places where our fight for independence occurred: Bunker Hill, Saratoga, Trenton, Princeton, Yorktown, and Valley Forge. But who mentions the little known and too often forgotten Fishkill Supply Depot and Encampment where material and supplies to keep the Continental troops fighting; were built, collected and distributed, where British soldiers were imprisoned and Americans received hospital care, where Revolutionary War soldiers served and over 300 were buried in unmarked graves.

What is the Fishkill Supply Depot?

Declared as "the last of the important Revolutionary War sites yet to be properly explored," the Fishkill Supply Depot remains so today: a one-of-a-kind site of national importance that has never gotten its due. Located in Fishkill, New York, the Depot was a key strategic center of the American Revolution, established and visited repeatedly by George Washington. Known as the "Military nerve center of the Continental army," the Depot was one of three major encampments along with Morristown and Valley Forge. Hallowed history happened here - hundreds of the original soldiers who fought to found our nation died and were buried in unmarked graves.

Central to the outcome of key battles like Saratoga, the Depot played an important role in the founding of the United States, and its significance in American history cannot be overemphasized. Yet today, the National Register Fishkill Supply Depot is under threat of commericial development. 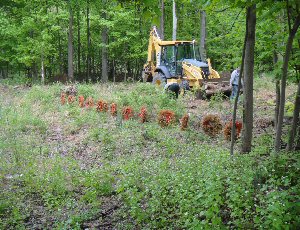 In May 2013, earth-moving equipment is brought on-site at Crossroads to clear land for development while wreaths from our annual WAA event in December still stand proud marking the graves of Fishkill Revolutionary War soldiers.

Reflection, reverence and restraint from development are the responses such sacred ground calls forth. Rigorous historic preservation and a well-supported plan to share this legacy with future generations is long overdue. The opportunity has now arrived.

Time is running out for preserving a priceless heritage, a key historic and archaeological site in the town of Fishkill, dating from the American Revolution. The site, the Fishkill Supply Depot, has been listed for decades in the National Register of Historic Places and consists of more than 70 acres on the East and West sides of southern Route 9. Here more than two centuries ago, thousands of Continental Army soldiers weathered the winters of 1776 to 1783 and blocked the British strategy of advancing unopposed up both sides of the Hudson to secure a line of communication from New York City to Canada. If the patriot forces had failed in this effort, it could have spelled defeat for the patriots and assured the ultimate victory of the Royalist cause in North America. 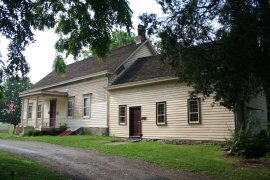 The Van Wyck Homestead (Wharton House) served as headquarters of the historic Fishkill Supply Depot and is the only remaining structure.

At its peak, the encampment, built under orders from General George Washington was a small city which included extensive barracks and officer huts for thousands of soldiers, guard house and palisade, a prison, major hospital, artillery placements, storage buildings, an armory, blacksmith shops, stables, parade grounds, and a powder magazine which supplied all Northern Patriot forces. Today, the only remaining structure is the Van Wyck Homestead, originally a farmhouse which served as a headquarters for military operations.

Reflecting the site's importance, the Fishkill Supply Depot and Encampment was placed on the "National Register for Historic Places" in 1974. But subsequently plans to make the Depot a national park and open it up to serious archaeological investigation were thwarted. Now, once more, land belonging to the encampment and supply depot, which has never been properly assessed by experts in the field of military archaeology, is being seriously threatened by a new round of commercial development on land east of the highway. As a result, the archaeological and historical record of what remains of the encampment will be further jeopardized, depriving future generations of a direct link to a remarkable past.

Read the Marquis de Chastellux's Account of a Visit to the Fishkill Depot, 1780

The Fishkill Supply Depot was critical to the success of the Continental Army during the American Revolution and was central to the founding of the United States. Documents show that its importance to General Washington as an essential military facility cannot be overestimated. The Depot played a vital role in the victory of the Continental Army over British forces during the American Revolution, and is therefore listed on the National Register of Historic Places. It is a highly unusual and significant part of the historical heritage of the Town of Fishkill, of the State of New York and of the United States of America.

The barracks extended along the road, a half-mile south of the village, in close proximity to the house. Near this residence, "by the large black-walnut trees, and east of the road near the base of the mountain, was the soldier's burial ground."...

The Threat to a Site of National Significance 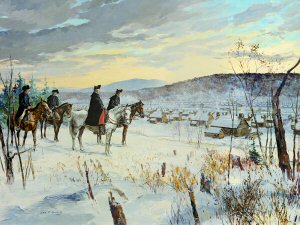 "The Last Cantonment 1783" by Hudson Valley artist John F. Gould is a good depiction of what the depot would have looked like during the Revolutonaray War.

The last 20 acres of open space within the National Register-designated site are proposed for development that would destroy archaeological features and artifacts reported in earlier studies. New archeological studies were recently completed in 2009 with striking findings confirming the significance noted here. The two remaining large open space parcels, currently for sale, represent the only remaining intact vestiges of an important part of the nation's founding. We and others strongly encourage the town to consider how it can help preserve and protect this important historic site. The opportunity to achieve this worthy patriotic goal is not likely to ever come again.

The preservation of the Fishkill Supply Depot as a historic resource is consistent with the current comprehensive plan for the Town of Fishkill in which the southeast quadrant at the intersection of I-84 and US-9 is specifically addressed. We encourage you to show your support and help save this sacred site.

Goals for Saving the Site

Send questions or comments about the Fishkill Supply Depot to: info@fishkillsupplydepot.org